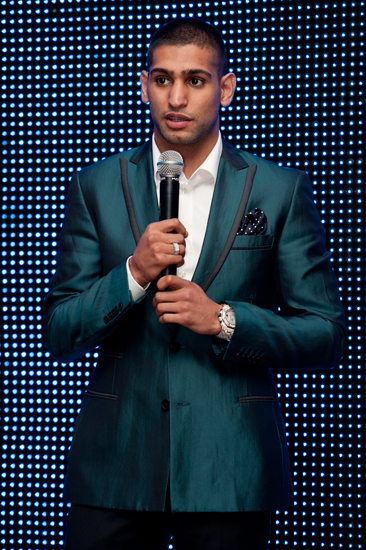 Amir Khan Helps to Raise over £80,000 for Victims of Horn of Africa Drought

Britain’s boxing Superstar Amir Khan addressed over 700 people at Islamic Help’s charity dinner which took place on Saturday night at the Hilton London Metropole. Having returned recently from a visit to the White House, Amir was intent on making a difference and to contributing to ease the plight of those caught in the worst drought to have hit the region in over 60 years. When addressing guests on Saturday he spoke of his passion for the cause and how moved he had been “I wanted to give something back and that is the reason we all got together and joined Islamic Help and thought about having this charity event”.

Over £80,000 was raised during the evening and a pair of Amir’s boxing gloves was auctioned for a staggering £7500; a Team Khan T-shirt and Khan–Judah fight poster raised £825 and £750 respectively. Zaheer Khan, Head of Fundraising at Islamic Help was overwhelmed by the response to the event – “We knew that by bringing in a big name and someone as popular as Amir we would have a great response but we have been taken aback! Amir’s a great guy and a brilliant ambassador for the sport, the country and Muslims worldwide – we’re honoured to have worked with him to raise money for such a cause.”

Amir, the Unified World Light-Welterweight Champion has utilised his position as one of the country’s leading sportsmen to carry out charity work in the UK and overseas. He has worked with young people, those battling with social and economic disadvantage, has set up the Gloves Community Centre and Boxing Gym in Bolton and continues to support a number of grass roots initiatives.

The Horn of Africa Crisis is, according to the UN, set to worsen over the coming months and as many as 750,000 people may lose their lives. The UN has recently declared a famine in Bay, the sixth area in Somalia to have been declared a famine zone. The most vulnerable are still at greatest risk and acute malnutrition rates amongst children are at a staggering 58% in Somalia. Islamic Help launched an appeal for drought victims over three months ago and has carried out work on the ground to reach those in most need.

For more information on the Amir Khan Fundraising Dinner or to make a donation to help the people caught in the Horn of Africa Drought Crisis please visit www.islamichelp.org.uk or call 0121 446 5682.