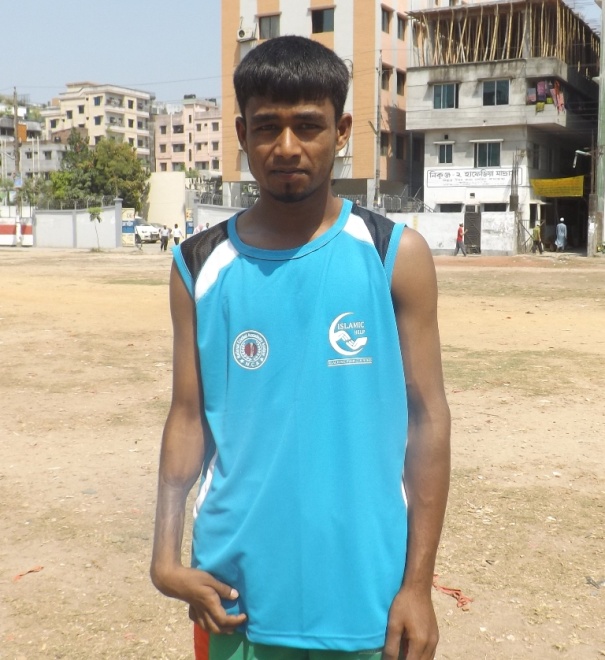 All the odds seemed stacked against Mohammed Imran. A life of poverty, his family struggling to surv...

All the odds seemed stacked against Mohammed Imran. A life of poverty, his family struggling to surv...

All the odds seemed stacked against Mohammed Imran. A life of poverty, his family struggling to survive and his own physical disability which means he cannot use his right hand.

With the support and backing of Islamic Help however and his own grit and determination, Imran is not only overcoming those hurdles but now has the chance to represent his country, Bangladesh, playing the sport he loves – cricket.

The youngest of eight brothers, Imran lives with his parents and two brothers who are students in their 20s. Their father, 60 year-old Mohammed Saeed, struggles to maintain the family on an income of just £40-a-month as a fruit trader, while their mother Shajeda Khatun, aged 55, looks after the household.

Imran’s parents were always fearful about his health and welfare because of his disability. A childhood accident resulted in a serious injury and, with his parents unable to finance the necessary surgery, he lost the use of his right hand.

His passion was cricket and despite his parent’s opposition – they would sometimes punish him when he sneaked out to play the game – he displayed a determination to continue playing the sport alongside his education.

In August 2011, he came to the attention of Islamic Help Bangladesh’s volunteer team and after much persuasion, his parents allowed him to enrol in IH’s Cricket Academy for Street and Underprivileged Children (right).

Showing tenacity, endurance and discipline allied with skills and ability, he progressed to play in the under-14 team in Dinajpur followed by appearances for an under-16 team in tournaments in the Saidpur area.

The trials, over three days in March, attracted 180 participants, a number which was eventually whittled down to 25 and then a final squad of 15. Imran is one of those proud 15 and now has a chance of representing his country in September at an Asia Cup international tournament for the disabled which will also feature India, Pakistan, Sri Lanka and Afghanistan.

The opportunity to be one of 11 players representing his country in the international arena also brings with it the privilege of a contract and salary with the Bangladesh Cricket Board, an improvement in his standard of life and the prospect of a bright future.

Imran is also being heralded as an example to other disabled youngsters. In a statement, his parents thanked Islamic Help and the academy for paving the way for their son’s development.

“May Allah bless Islamic Help Headquarters for supporting Islamic Help Bangladesh in implementing this project and all the coaching staff, supporting staff and other players. We wish for a bright future for the organisation and a prosperous life for all who have assisted our son in achieving such a delightful achievement. Now he is not only our son, but also our country’s.”

Imran also thanked Islamic Help and the academy and said he hoped to inspire other youngsters. “It would not have been possible for me to get such a great opportunity without Islamic Help and I am ever grateful to them.

“If I can do anything for the betterment of the charity and the people it helps, or if my words will inspire somebody else, I am always eager to do accordingly.

“After being established, I want to support and advise other boys like me – street children, the under privileged and the disabled.”