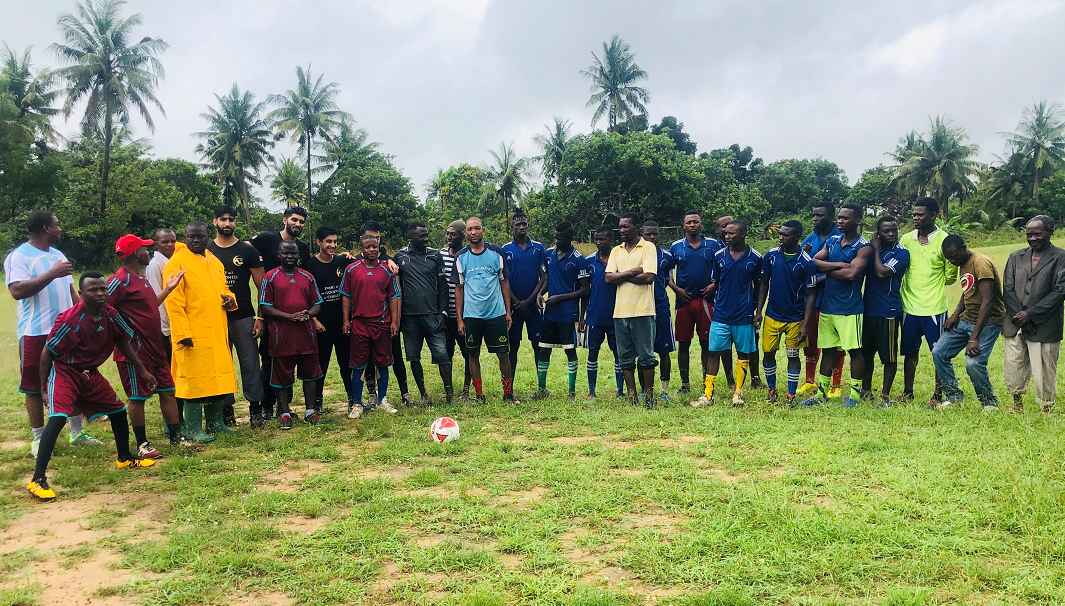 With just a day left in Tanzania as part of their Mission Possible deployment, the team of UK volunt...

With just a day left in Tanzania as part of their Mission Possible deployment, the team of UK volunt...

With just a day left in Tanzania as part of their Mission Possible deployment, the team of UK volunteers took on a local team in a friendly game of football. The result wasn’t the be all and end all, as the volunteers departed leaving sports gifts for local players.


As we left the hotel it felt nearly impossible to drive on the roads of Tanga in this rain. The roads were bumpy and the ride felt like we were never going to make it to the school. But this was one of the lucky times that we didn’t get stuck in the ditches of the road. I guess this time the roads of Tanga became so normal to us that the ride didn’t feel too long.

Today was the big day where Islamic Help put together a team to play the local village team in a football match. Monsoon rain came to mess with our plans but that didn’t stop us.

The rain was so much that the gutter pipes for the rainwater harvesting system were overflowing but we still found a way to put that to good use by having a great big water fight with the children. The gleaming smiles on their faces said it all. We had so much fun with them making use of the beautiful weather.

After the rain had settled, the management decided that it was safe to start the Mission Possible football match. The local football team had arrived in their kits and football shoes. We, the team of Islamic Help, were dressed in our IH t-shirts and work safety boots!

IH Tanzania worker Yaseeni was the captain, he told us the formation we are in and who would play in what position. The whistle blew and the match kicked off. Another whistle a few minutes later - Team IH had a penalty! As Kaleem (IH volunteer Kaleem Abbas) lined up to take it, the goalkeeper was jumping on his line. Ready. SMASH! The ball was hit but unfortunately for us, the goalkeeper had saved it :/.

Just before the final whistle, the village team went on a counter attack and the ball ended up in the back of our net and we were 1-0 down.

The second half started, IH got a free kick. One of our workers, Micheal, lined it up, eyes on the goal, focused. He drove it and BOOM! Off the left post and in. GOALLLLLLL!!!!

The final whistle blew with the score 1-1, so it was down to penalties. Our 5 penalty takers were chosen – Yusuf, Kaleem, Zain, Saif and Buwa. The keeper saved Yusuf’s, Kaleem’s and Saif’s, while Buwa and Saiful found the net. With the score at 2-2, it came down to sudden death and while Yaseeni stepped up and scored for IH, the village team went on to win it. What a day!

We finished with a kind gesture to the club in Tanga by distributing football kits, footballs and a basketball. Helping yet another group of people as we said our goodbyes to the village.

The minibus awaited us, the villagers said their goodbyes and we were on the way back to the hotel and nearing the completion of Mission Possible 2019 in Tanga. An emotional yet joyful occasion as we left, knowing we had helped a community but sad about the fact that we couldn’t do more.