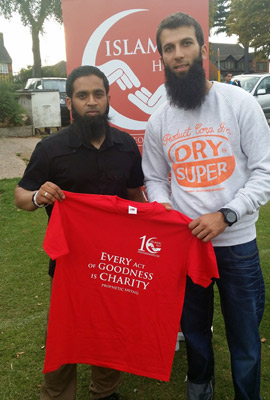 One of our longest standing relationships has been with Attock Cricket Club, a community club in the...

One of our longest standing relationships has been with Attock Cricket Club, a community club in the...

Batting for a better future with Attock Cricket Club

One of our longest standing relationships has been with Attock Cricket Club, a community club in the heart of Birmingham.

Attock CC started as a parks team and has developed over the years to become one of the city’s leading club sides. It now has its own pavilion and several trophy-winning teams, including four youth sides ranging from the under-9s to the under-15s.

It also hosts regular coaching and sports sessions for children from local schools and communities.

Islamic Help’s partnership has helped us contribute to the development of youngsters by providing them with a focus and opportunity to improve their life prospects through grassroots cricket.

Moeen Ali was the guest of honour when Islamic Help staged a charity T10 tournament at Attock CC in September 2014. The Worcestershire and England all-rounder took time out to sign Islamic Help cricket bats for charity auctions and was presented with one of our T-shirts by Birmingham fundraiser Syed Ali.

Attock CC meanwhile presented a cheque, via the Lord Mayor, for £4,000 towards our Gaza 100 Water Challenge, which was raised during a charity match where Attock legends took on a Pakistan legends team.